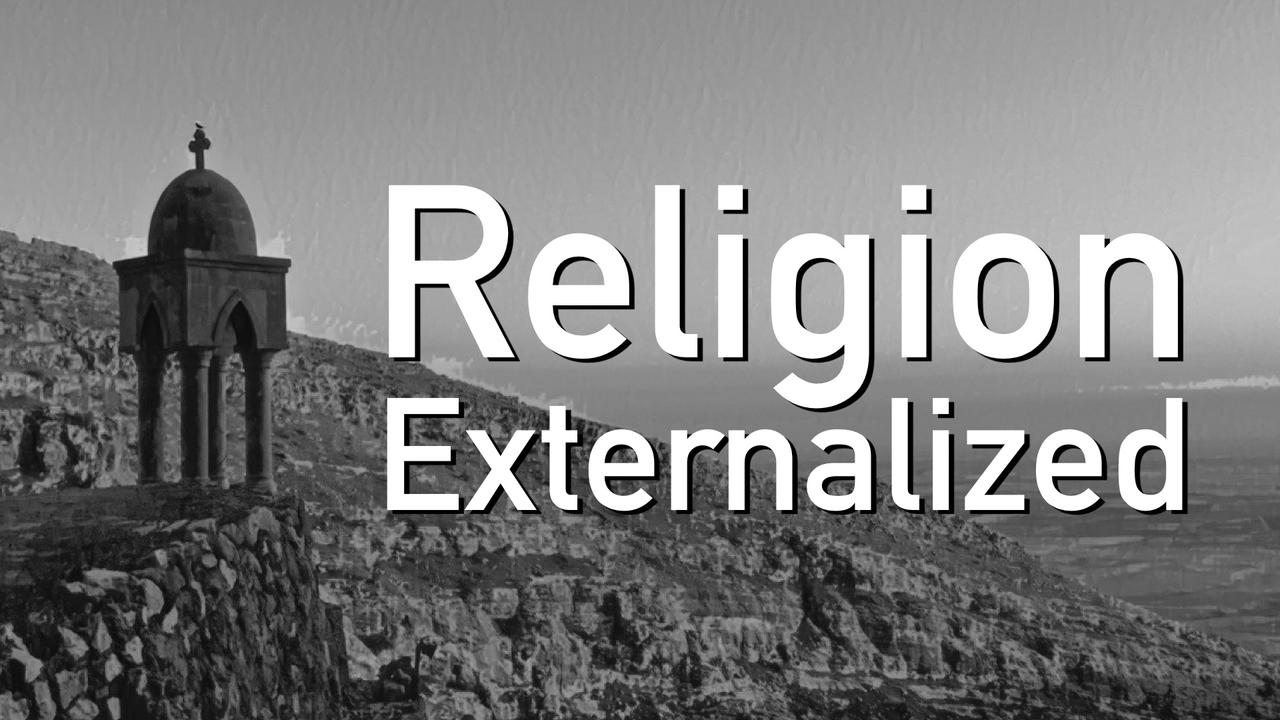 Culture is simply a worldview made evident. It is basic beliefs worked out into habits of life. It is theology translated into sociology. Culture is a very practical expression of the common faith of a community or a people or a nation. Culture is, as Henry Van Til famously quipped, "religion externalized."

What a person thinks, what he believes, what shapes his ultimate concerns, and what he holds to be true in his heart—in short, his faith or lack of it—has a direct effect on his material well-being, behavior, and outlook; on his sense of what is good, true, and beautiful; on his priorities, values, and principles. After all, “As a man thinks in his heart, so is he.”

What is true for one person is equally true for a whole community of persons. In 1905, Max Weber, the renowned political economist and “founding father” of modern sociology, affirmed this fundamental truth for modern social scientists in his classic work, The Protestant Ethic and the Spirit of Capitalism.

He argued that the remarkable prosperity of the West was directly attributable to the cultural, personal, and ethical prevalence of the Christian tradition. In contrast to so many other cultures around the globe, where freedoms and opportunities were severely limited and where poverty and suffering abounded, Weber found that faith brought men and nations both liberty and prosperity.

First, true faith reorients all of us fallen and sinful men to reality. Because of our selfish proclivities we are all too naturally blind, foolish, ignorant, and self-destructive. More often than not, we are ruled by our passions, our lusts, and our delusions. We simply have a hard time facing reality without the perspective of faith. Faith in Almighty God, however, removes the scales from our eyes and the shackles from our lives. In Him we are at last acquainted to what is right, what is real, and what is true.

“Faith serves us all well as a kind of reality-check. It is a transcendent value that enables us to more adequately and objectively evaluate our most bewildering situations and circumstances. In other words, it gives us a perspective beyond our own purblind vantage.”

A culture shaped by what is right, what is real, and what is true will manifest significantly art, music, literature, science, and ideas just as surely as a person shaped by them will.

Second, the Christian faith counteracts the destructive effects of sinful actions and activities. Sin is not a concept that has much currency with modern social scientists, economists, politicians, community organizers, civil rights activists, and social service providers. It has become rather politically incorrect to even speak of it.

Men who have rejected God and do not walk in faith are more often than not immoral, impure, and improvident. They are prone to extreme and destructive behavior, indulging in perverse vices and dissipating sensuality. And they—along with their families and loved ones—are thus driven over the brink of destruction. On the other hand, faith reforms us with new and constructive values. We are provoked to moral and upright lives of diligence, purity, sober-mindedness, thrift, trustworthiness, and responsibility.

According to psychologist Nancy Hellman,

“Where poverty, violence, and destruction germinate in the rotting soil of sin, productivity, harmony, and hope flourish in the fertile field of faith. If we were to recover the concept of sin in our society—even from a moderately secularized perspective—we would go a long way toward eradicating the evils of modern life.”

In other words, a culture that understands the character and nature of the Fall is going to be tangibly, substantively, and manifestly different than a culture that does not.

Third, the Christian faith establishes a future orientation in our hearts and minds. All too often the modern men and women either flounder in a dismal fatalism or we squander our few resources in an irresponsible impulsiveness. Many of us are terribly short-sighted, unmotivated, and naive. And “where there is no vision the people perish.” On the other hand, genuine faith provokes us to live thoughtfully, to plan, to exercise restraint, and to defer gratification in order to achieve higher ends. We are induced to self-control, wisdom, and careful stewardship in order to build for the future.

“History’s record is clear: a people who cannot look past the moment, past the fleeting pleasures of fleshly indulgence, will be a people whose culture vanishes from the face of the earth. Ultimately, only faith gives men a sustaining vision for that which is other than their own selfish desires.”

Fourth, the Christian faith provokes us to exercise responsibility. Outside of the bounds of faith in God we are all naturally prone to selfishness, wastefulness, and sloth. Faith on the other hand enables see past ourselves, growing into selfless maturity.

"It is faith in all its multifarious forms and luminosities, that can by itself move the mountains of sloth and depression that afflict the world’s stagnant economies; it brought immigrants thousands of miles with pennies in their pockets to launch the American empire of commerce; and it performs miracles daily in our present impasse."

Senator Ted Kennedy once asserted that, "The ballot box is the place where change begins in America." Although he has been fiercely and vehemently wrong in the past, Kennedy has never been more wrong than this.

As George Will has argued,

“There is hardly a page of American history that does not refute that insistence, so characteristic of the political class, on the primacy of politics in the making of history.” In fact, he says, "In a good society, politics is peripheral to much of the pulsing life of the society."

This is the great lesson of history: it is ordinary people of authentic Christian faith who are ultimately the ones who best able to shape the outcome of human events--not kings and princes, not masters and tyrants. It is laborers and workmen, cousins and acquaintances that upend the expectations of the brilliant and the glamorous, the expert and the meticulous. It is plain folks, simple people, who literally change the course of history--because they are the stuff of which history is made. They are the ones who make the world go round. For, as G.K. Chesterton said, "The most extraordinary thing in the world is an ordinary man and an ordinary woman and their ordinary children."

Ultimately, that is our greatest hope for the future. It is simply that a new grassroots majoritarian emphasis on things that really matter--on the Gospel and its fruits--will emerge as we train up the next generation of culture-shapers. It is that a love for hearth and home, community and culture, accountability and availability, service and substance, morality and magnanimity, responsibility and restoration will capture hearts and minds and lives. It is a hope that may be stymied, obstructed, and hampered--but ultimately it cannot fail.

As the famed journalist H.L. Mencken once said,

“The man who invents a new imbecility is hailed gladly, and bidden to make himself at home; he is to the great masses of men, the beau ideal of mankind. His madness must necessarily give way to right, sooner or later, though usually later.”

Or as the poet F.W. Faber wrote:

For right is right, since God is God,

And right the day must win;

To doubt would be disloyalty,

To falter would be sin.