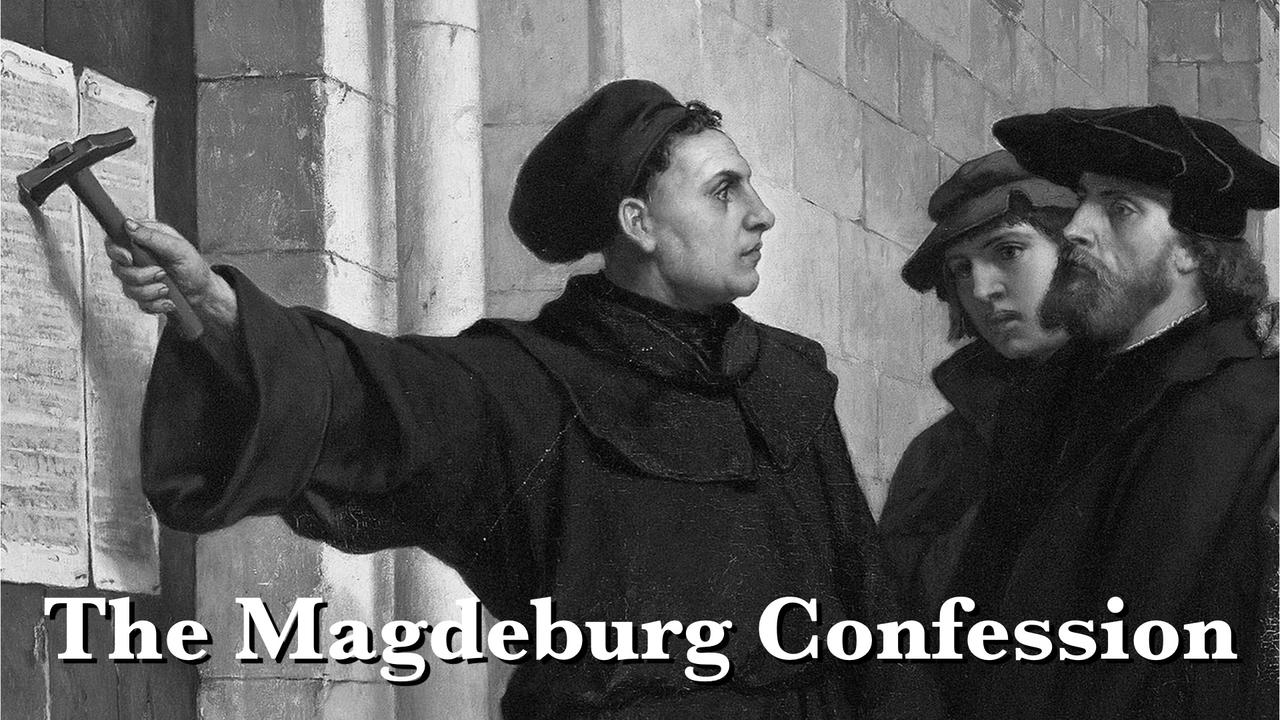 By the 16th century virtually no one disagreed on the fact that the West needed to be reformed.  What they disagreed on was what that reform should entail and how it was to be effected.  In frustrated tension, dozens of competing factions, sects, schisms, rifts, rebellions, and divisions roiled just beneath the surface of the West’s tenuous tranquility for decades.

Finally, on October 31, 1517, those pent-up passions burst out into the open when an Augustinian monk named Martin Luther posted his Ninety-Five Theses on the door of the Castle Church in Wittenberg.  In a single stroke, not one, but two momentous renewal movements were launched that at last were able to effect genuine reform within the church: the Protestant Reformation and the reaffirmation of covenantal principles to civil governance.

This is the essential historical and cultural framework out of which the Magdeburg Confession of 1550 was written.  Against the backdrop of the centralizing totalitarianism of the Hapsburg hegemony, the newly revived Holy Roman Empire, the people of the little German town of Magdeburg, situated between Berlin and Hanover, not far from Brandenburg, determined to recover their federal, their covenantal, their Biblical culture.

Officially titled, The Confession, Instruction, and Admonition of the Pastors and Preachers of the Christian Congregations of Magdeburg, the Confession was more than just a statement of Protestant and Lutheran orthodoxy. Composed in seven chapters by the nine pastors of the city in 1550 in response to the Augsburg Interim and its legal threat imposing Roman Catholic dictates, the Confession articulates the doctrine of “the lesser magistrates” and offers a Christian defense of the ideas of principled resistance to tyranny, civil disobedience to ungodly decrees, and even the use of force when necessary.

It was the first clear declaration of a Biblical posture of resistance against unjust higher authorities. Theodore Beza believed the Confession provided faithful believers with an example of how to respond to political abuse and tyranny—indeed, he used insights from the Confession in his influential notes for the Geneva Bible, the Bible used by most of the Puritans and Pilgrims for at least three generations afterward.

So it was that the font of covenantal ideas in the Confession flowed out into the reforming nations of the West: they were echoed in Calvin and Beza’s Geneva; they helped shape Knox’s Scotland; they were influential in Bucer’s Strassburg; they laid the foundations of Cranmer’s England; and they became central to the vision of the Founders of America’s great experiment in liberty.

But for the same reasons that the Magdeburg pioneers had to recover the old principles of covenantal federalism by means of reformation, we need to pay heed to these ideas today.  Western Civilization is once again in very real jeopardy.  Freedom is once again threatened.  Life, liberty, and opportunity are once again coming under the shadow of vested centralized powers and principalities. By looking back at the essential notions upon which our freedoms were built we may yet be motivated and equipped to begin the process of reforming, restoring, and recovering.  May it be so, Lord.

The Magdeburg Confession of 1550: Excerpts

Preface: The confession of the doctrine of the Reformation, which is the doctrine of Christ Himself, with great faith and glory of those who confess it, has been cast off in a horrible crime against conscience by the Princes and German states of the Empire. It therefore is necessary for us to declare our firm resolve and commitment to “walk not in the counsel of the wicked, nor stand in the way of sinners, nor sit in the seat of scoffers; but to delight in the law of the Lord, and on His law meditate day and night.” (Psalm 1:1-2)

For is it not really the rejection of the Biblical principles of the faith, to subject doctrine and the Church to the authority of the Antichrist? That no further mention should be made of the doctrines of grace either by voice or in writing, but that the memory and appearance of that confession should be effaced by a contrary label and an indifferent appearance? For it to be cursed by some men, unto the pleasure of our enemies and the contempt of the Gospel? That although Luther has been the chosen instrument of God for laying bare this gospel against the Antichrist, the churches of Christ should be subjected to that very Antichrist? In all these things, we see a true rejection before God of the entire faith, and with this also a rejection of Christ himself, so neither Caesar with his bishops and popes has interpreted these indications in any other way, nor is our side, especially the foreign churches, able to interpret them in any other way.

Therefore, even if these states and those whom they have consenting in this apostasy have really rejected the faith, and by this rejection or harlotry with the Antichrist have made all of Christ, the Gospel, and the rest of religion all no less useless to themselves than have other fornicators of this world who do not repent—nonetheless, there still remain some poor vestiges of states, however weak, and of other pious persons even under the apostates, who agree with us in this, and who also retain the articles of the doctrine which was a handed down to us by the ministry of the Reformers, and in these articles they confess Christ like the thief on the cross.  Since our magistrates and the church of this city are among them, to the point that our enemies themselves profess to be assailing the remnants of this confession among us, we judge that it is part of our duty, since by the kindness of God we seem to be singled out from the whole church to have a voice that is still free, that we publicly put forth something to vindicate in some way the revealed doctrine of the Gospel from this unjust oppression.

So in this writing, first of all we shall only repeat—we shall not argue—the articles of doctrine made plain by the Reformation as Christian, orthodox, and catholic, and so far unconquered, as those which agree with the doctrine of the Apostles and Prophets, with the Apostles, Nicene, and Athanasian creeds, and with the purer church of all ages.

Pierre Viret, The Christian and the Magistrate

Matthew Trewhella, The Doctrine of the Lesser Magistrate