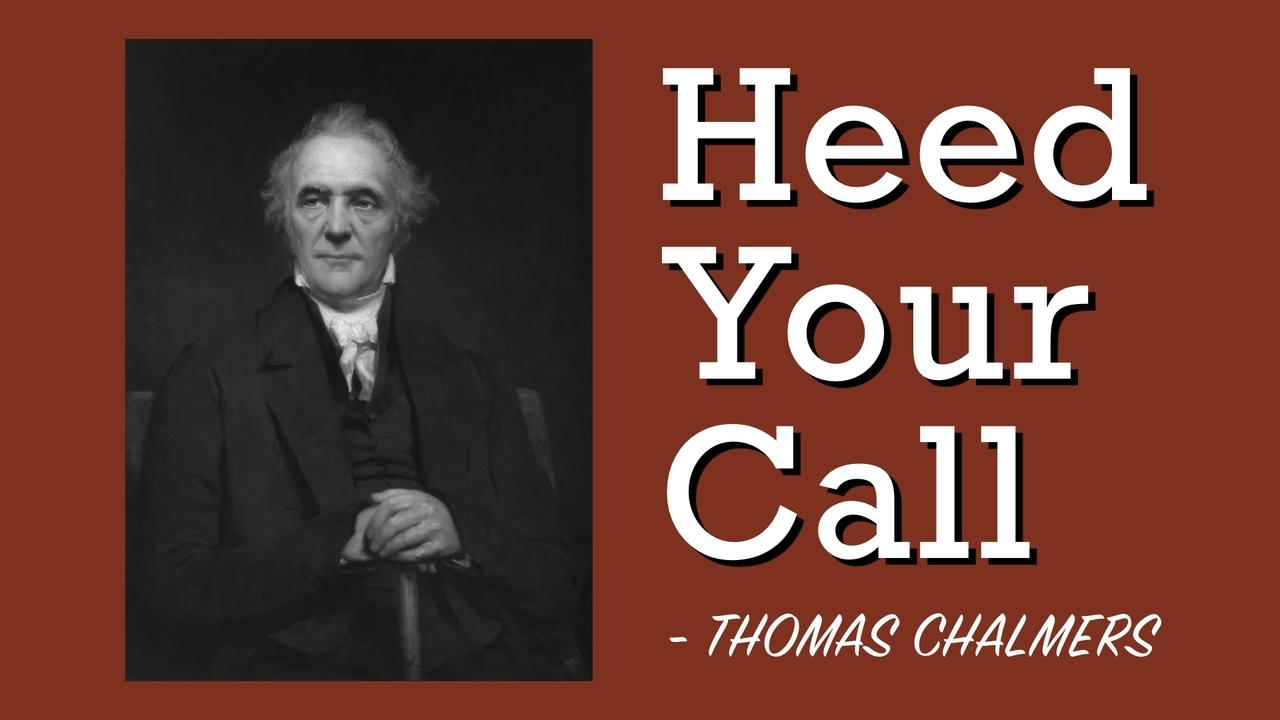 He didn’t really tell me anything I didn’t already know.  Nevertheless, his counsel proved to be invaluable.  He somehow was able to wrench my indecision and uncertainty out of the realm of the individual and the subjective and into the much surer and securer realm of the covenantal and the objective.

I had been wrestling with the issue of calling for months when I walked into a dusty little antiquarian bookshop and providentially discovered a frayed, foxed, and frazzled copy of a booklet entitled Heed the Call.  It had actually been written for a now practically-forgotten ecclesiastical crisis in 1844 by Thomas Chalmers, but it seemed to me to be more relevant than ever as I carefully poured over its brittle pages.

Like Chalmers, I had once been a pastor, but was currently engaged in academia and publishing.  And like Chalmers, I often wondered if I had made a wise choice—or rather, if I had somehow failed to heed God’s call.

Drawing on the great heritage of the Reformation and the inestimable riches of Scripture Thomas Chalmers not only answered my plaguing questions, but afforded me a perspective of calling that all my years before, during, and after seminary never did.

The great Scottish pastor, social reformer, educator, author, and scientist Thomas Chalmers lived from 1780 to 1847.  During the course of his long and storied career he served as the pastor of three congregations, taught in three colleges, published more than thirty-five best-selling books, and helped to establish more than a hundred charitable relief and missions organizations.  He practically reinvented the Scottish parish system as well as the national social welfare structure.  He counted such luminaries as the Duke of Wellington, Sir Walter Scott, King William IV, Thomas Carlyle, William Wilberforce, and Robert Peel as his friends and confidantes.  Indeed, he was among the most influential and highly regarded men of his day.

Even so, at the end of his life, when his reputation was well-established, his contribution to the life of Scotland, England and Ireland fully recognized, and his fame spread around the world he did not hesitate to involve himself in—and ultimately lead—a movement that was to divide the Church of Scotland, and to set him in apparent disregard of the authority of the highest civil court in the land.

With the disappearance of Roman Catholic authority in Scotland in the sixteenth century, Reformers worked hard to replace it with a faithful national Church.  Their struggle for spiritual independence had been a long and costly one under the leadership of John Knox, Andrew Melville and Alexander Henderson amongst others.  At long last, in 1690, their Reformed Church was legally recognized by the crown as the established Church of Scotland.  The danger of such an establishment was that the state might attempt to manipulate the internal affairs of the Church.

Sadly, that danger was realized when Parliament imposed conformity with the standards of English patronage upon the Scottish Church.  In reality, patronage was hardly different from the Medieval practice of lay investiture—it gave lords, lairds, and landowners the right to appoint a parish a minister who might or might not be Biblically qualified for the post or acceptable to the elders of the congregation.  The patronage conflict in came to a head in 1838 when several ministers were forced on congregations opposed to their settlement and the Court of Session and the House of Lords ratified the appointments.  Many, including Chalmers, believed that the integrity of the Gospel was at stake.

At about the same time, it was decided by Parliament that the Church did not have the power to organize new parishes nor give the ministers there the status of clergy of the Church.  She had no authority to receive again clergy who had left it.  And perhaps worst of all a creeping liberal formalism was slowly smothering the evangelical zeal of the whole land—in large part due to the assumption of pastoral duties by men altogether unfit for such a solemn vocation..

Alas, despite repeated requests, the Government refused to take action to deal with the threat of spiritual atrophy that a deficient or subjective view of calling inevitably produced.  After a ten year long struggle to regain the soul of the church, the evangelical wing, led by Chalmers and others, laid a protest on the table of the Assembly and some four hundred ministers and a like number of elders left the established Church of Scotland on May 18, 1843, to form the Free Church.

When the General Assembly of the Free Church was constituted that grave morning, Thomas Chalmers was called to be its Moderator.  He was the man whose reputation in the Christian world was the highest; he was also the man whose influence in directing the events leading to what would eventually be called “The Disruption” had been greatest.

Obviously, if the conflict had been provoked by a faulty view of what actually constituted a call to the Gospel ministry, it was incumbent upon the evangelical leaders to articulate the correct view.  Chalmers wrote Heed the Call to do just that.

He argued that there were essentially

“only two guiding principles for the affirmation of any doctrinal standard, yet which are of particular relevance to the current discussion.  They are but the plenary objectivity of Holy Writ and the living appurtenance of parish life; again, they are but the authority of Scripture and the parameters of the covenant.”

In other words, he believed that it was not necessary to depend on either the predilections of the rich and powerful or the inclinations of the people at large to determine who was or who wasn’t called into the ministry.  The Bible was, is, and always shall be clear in detailing specific criteria and prerequisites for vocational service in the Church.  But not only that, covenantal communities serve as the proving grounds for those criteria and prerequisites so that there is a kind of checks and balances system at work.

Chalmers asserted that the Bible makes it plain that any candidate for the ministry as well as the members of his immediate family must evidence constancy of character and virtue over the course of time (1 Tim. 3:1-7; Titus 1:5-9).  He must also demonstrate particular pastoral gifts and aptitudes in the handling of the Gospel (Eph. 4:4-16; 2 Tim. 2:15-16).

“The Word of God countenances as requisite both a testable sanctification and a notable endowment.”

And such mandatory capacities are observable within the context of everyday parish life (Philem. 4-7).

“An affirmation of the ministerial calling is the inevitable result of a life rightly lived, gifts rightly shared, and proficiencies in handling both Scripture and adversity amongst those who might best be able to judge a candidate’s sincerity: his neighbors.”

He believed that by holding candidates for the ministry to this twin standard, both “the integrity of the Church’s divine offices” and the “vitality of every other calling to which believer priests might be appropriately inclined” would be preserved.  The result was that mere desire, or opportunity, or inclination, professional preparation, or even obvious aptitude alone was insufficient to commend a man to the pulpit.  And despite the need for faithful pastoral servants, all manner of haste in discerning the authenticity of calling was carefully avoided (1 Tim. 5:22).  Ministry was thus maintained as an vital organism rather than as a mere organization.  The Biblical precepts set the standard and then the community of faith affirmed and confirmed compliance with that standard in the life and work of every candidate.

When I first read the almost too-simple prescriptives of Chalmers in Heed the Call, I was flooded with a sense of relief.  The issue was not nearly as complicated as I had made it out to be.  I was able to rest in the assurance that there was no mystical override, no metaphysical trump, no divine notary that I had somehow overlooked or misread.  Instead, I could rely on the clear mandates of Scripture as confirmed by those God had providentially placed around me in my own local church.

“Word and covenant: the one true foundation with its one true environ; they surely are the only, yet fully sufficient, provisions at our disposal for the discernment of purpose in this poor fallen world by which we might duly heed the call.”

Oh, and by the way, in the end, I determined that I was indeed supposed to return to the pastorate. For that happy decision, I have to thank Thomas Chalmers.